“…there’s getting to be less and less of me. Where will it end?”

I was originally drawn to this novella because of the peculiarity of “The Faster I Walk, the Smaller I Am.” I mean, how am I supposed to pass up a title like that?? And I went on to give it a shot when I saw that the novel was barely over 100 pages. However, I think I misread the blurb, thinking this would be about an old lady discovering something new about life. It wrote: The Faster I Walk, the Smaller I Am is a macabre twist on the notion that life “must be lived to the fullest.” So I read this and assumed that somewhere throughout this read we would have an adventure-esque trip.

What I got instead was the day to day of Mathea Martinsen, who’s almost a hundred, loves rhymes, and has social anxiety.

“There will be a community gathering next Sunday,” it reads. “All residents must attend!!!!” I gulp and read the rest of the flier as quickly as I can, just in case there’s something even worse there, but I don’t know what could be worse than what I’ve just read.”

And her talents include sorting cards and “also good at starting new rolls of toilet paper, I could unstick the first sheet without tearing it. ”

The trouble was that little to no captivating things occurred throughout, unless you consider it fascinating that Mathea’s tooth got stuck in the cucumber she was eating… Like, here’s literally everything that happened over the course of 100 pages: “I stole from the grocery store, gave Åge B. the time, buried a time capsule, baked rolls, turned up the hot plate, tried to plan my own funeral, tried to become a tree, and then the most difficult thing of all—I used the telephone, which was really too much for me—and yet I’m still sitting here in my apartment and I’m just as afraid of living life as I am of dying.” That’s the whole of it. There’s no exciting adventures, no meeting kindred spirits, no engaging dialogue. Nothing.

The stream of consciousness writing, similar to that of Suicide by Edouard Levé, was unfortunately another negative in my book. It came off as disjointed and difficult to get into. This read would’ve been more enjoyable as a short story than a novella, in my opinion.

Ultimately, The Faster I Walk, the Smaller I Am just wasn’t what I was expecting, and it didn’t surprise me for the better with it. However, I am glad to have read my first translated Norwegian fiction with this, since I’ve been wanting to check that box off my list for awhile now.

Note: I’m an Amazon Affiliate. If you’re interested in buying The Faster I Walk, The Smaller I Am, just click on the image below to go through my link. I’ll make a small commission!

I’m grateful to have completed my reading goal of the year (100 books) with this heartrending novel-in-verse. Up From the Sea follows the life of how one teen boy survives the March 2011 tsunami that devastates his coastal Japanese village.

“What could possibly hurt me
more than this quake
already has?”

On that fateful day, Kai loses nearly everyone and everything he cares about in the storm. When he’s offered a trip to New York to meet kids whose lives were changed by 9/11, Kai realizes he also has a chance to look for his estranged American father. Visiting Ground Zero on its tenth anniversary, Kai learns that the only way to make something good come out of the disaster back home is to return there and help rebuild his town.

I went into this read expecting it to grow in intensity with each passing page since it’s tackling such a heavy subject matter. However, I felt like there was little to no emotion inserted in the writing where it counted the most. In the end, it came off quite distant and disconnected from what I was anticipating with the discussions of 3/11 and the tenth anniversary of 9/11.

“We all remember
exactly where we were
and what we were doing
when our lives
changed forever.

9/11 and 3/11 are so different,
two separate disasters—
but maybe they’re also
the same, Tomo says.

How so? Kenji asks.

Each one changed
our country forever.”

The afterword where the author discussed the inspiration behind some of the scenes in Up From the Sea was the one place where I felt everything I should’ve encountered during my reading experience.

“Inspired by a young boy I met in the disaster zone, I began a novel about a boy who loves soccer and creates a team to rally his town after the tsunami. Months later, I discovered that exactly this had been done in coastal Onagawa. The team is the Cobaltore Onagawa Football Club. Supporters from all over the world helped in the difficult days following the disaster.
Later, I learned that a soccer ball that had belonged to a teenager in Rikuzentakata washed up in Alaska. Amazingly, the ball was found by a man with a Japanese wife who could read the messages written on it. The couple traced the owner and traveled to Japan to return the ball.”

I really wish I’d read this before starting the book.

But as with any read there are still a few pieces that made me experience something deeper within myself. Here’s a handful of them:

“THERE’S A SAYING IN COASTAL TOWNS—

inochi tendenko—
save your own life first.

A long time ago,
if you wanted to
marry someone from the coast,
the elders asked:

“If a tsunami came,
who would you save first?
Your wife and child,
or yourself?”

“If you can’t save yourself first,”
they said,
“you can’t marry anyone here.”
They’d lived through a tsunami,
knew its full power.

It’s true.
If you can’t save your own life,
the town will disappear.

And if that happens,
the future, too,
will disappear.

So don’t you dare
feel guilty for being alive,
Old Man Sato says,
looking from me to Taro
and back again.

We’ve got the future
to build.” 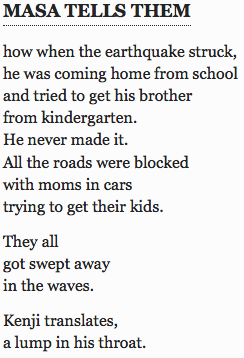 Ultimately, this survival story based on real life emotional events is vividly capturing and ends on a hopeful note.

I also listened on repeat to my favorite song of Lorde’s new album while reading:

Note: I’m an Amazon Affiliate. If you’re interested in buying Up From the Sea, just click on the image below to go through my link. I’ll make a small commission!

“Given that I am speaking to you, are you dead?”

This particular book has been sitting on my e-book reader for ages – so long, in fact, that I don’t recall why I downloaded it in the first place – but then last night I decided to randomly read the first page and damn, was that first paragraph hooking:

“One Saturday in the month of August, you leave your home wearing your tennis gear, accompanied by your wife. In the middle of the garden you point out to her that you’ve forgotten your racket in the house. You go back to look for it, but instead of making your way toward the cupboard in the entryway where you normally keep it, you head down into the basement. Your wife doesn’t notice this. She stays outside. The weather is fine. She’s making the most of the sun. A few moments later she hears a gunshot. She rushes into the house, cries out your name, notices that the door to the stairway leading to the basement is open, goes down, and finds you there. You’ve put a bullet in your head with the rifle you had carefully prepared. On the table, you left a comic book open to a double-page spread. In the heat of the moment, your wife leans on the table; the book falls closed before she understands that this was your final message.”

It’s been awhile since an introducing paragraph had captivated me this much, so I proceeded on with my expectations a bit more raised for what’s to come. Plus, I then reread the blurb and was that more dazzled:

Suicide cannot be read as simply another novel—it is, in a sense, the author’s own oblique, public suicide note, a unique meditation on this most extreme of refusals. Presenting itself as an investigation into the suicide of a close friend—perhaps real, perhaps fictional—more than twenty years earlier, Levé gives us, little by little, a striking portrait of a man, with all his talents and flaws, who chose to reject his life, and all the people who loved him, in favor of oblivion. Gradually, through Levé’s casually obsessive, pointillist, beautiful ruminations, we come to know a stoic, sensible, thoughtful man who bears more than a slight psychological resemblance to Levé himself. But Suicide is more than just a compendium of memories of an old friend; it is a near-exhaustive catalog of the ramifications and effects of the act of suicide, and a unique and melancholy farewell to life.

And what I came to notice quite quickly in here was how the writing seemed to be both breathtaking and utterly eye-catching.

“You remain alive insofar as those who have known you outlive you. You will die with the last of them. Unless some of them have made you live on in words, in the memory of their children. For how many generations will you live on like this, as a character from a story?”

I kept rereading some passages to really let the words sink into my skin. The writing is unlike anything I’ve read. The second person point of view really weighted in since I rarely get along with it, but in this book it really worked in my favor.

However, what derailed from my reading experience was the seemingly random structure meant to imitate human memory. I rarely, if ever, manage to get along with stream of consciousness writing. Since the novel started out fine enough when the author focused on describing the feelings – and not actions – of his friend, I wasn’t that worried about it. But I gradually grew bored of the narrator’s descriptions surrounding the past actions of his friend. Following his movements while going on vacations from cul-de-sac to restaurant to hotel wasn’t really working in my favor… So I kept hoping for the narrative to switch back to focus on describing the feelings of his friend, like this captivating passage:

“When, the next day, your friends repeated to you the words you had spoken to strangers in the café, you remembered nothing of them. It was as though someone else inside you had spoken. You recognized neither your words, nor your thoughts, but you liked them better than you would have if you had remembered saying them. Often all it took was for someone else to speak your own words back to you for you to like them. You would note down those sayings of yours that were repeated back to you. You were the author of this text twice over.”

Ultimately, this read set around mortality, friendship, depression and fatigue left me quite exasperated and exhausted by the end of it. I am, however, glad to have given it a go, since it was intriguing to see what Edouard Levé  knowingly worked on as his last novel.

Oh, and I listened a lot to this soothing song while reading:

Note: I’m an Amazon Affiliate. If you’re interested in buying Suicide, just click on the image below to go through my link. I’ll make a small commission!