Love Is Love is a collection of one- to two-page stories about the tragedy that took place on June 12, when 49 people were killed when a gunman opened fire in Pulse, a gay nightclub in Orlando. It includes stories that mourn the victims, examine love and celebrate the LGBTQ community.

To say that I was anticipating this would be understatement — Love Is Love had incredible potential to become a complete game-changer. But I quickly found that instead of targeting its focus on highlighting #ownvoices, this anthology decides to voice a lot of straight white men feeling sad and not really using their privilege to speak up in their immediate communities. To paraphrase one of the contributors, I felt like they were inserting themselves into a story that wasn’t about them… the people who can actually contribute something to Love Is Love were being overshadowed quite heavily.

I’m just flummoxed over the fact that they would ask multiple straight white men to contribute to this collection when you could have featured #ownvoices who know what they’re talking about compared to this: 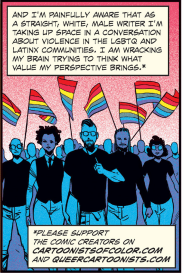 (Just one example out of quite a few.)

If you know this isn’t your story to tell, why are you still telling it??  It just really bothered me that these supposed allies put the main focus on themselves rather than on the people that actually got hurt and affected.

So in order to take my mind over how worked up this made me, I’m instead going to feature the 1 page stories that actually did contribute something more than “I don’t know what to say because I’m privileged as hell.” If I sound bitter, it’s because I am still a little bitter. 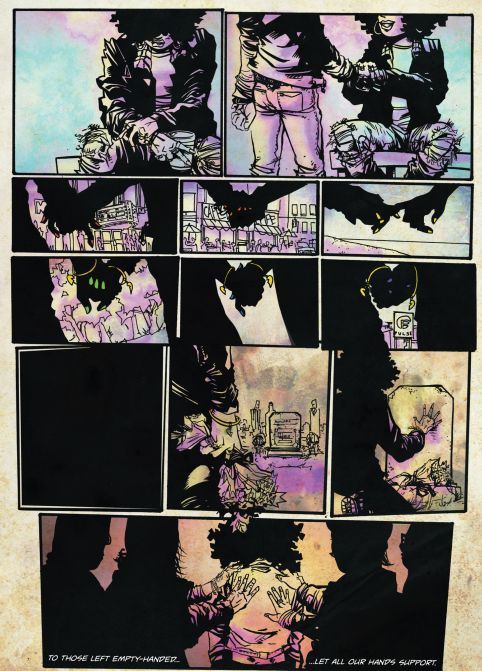 That last one knocked the breath out of me.

Love Is Love was for the most part a heartrending and hopeful tribute to the LGBTQIA+ community. And I’m more than appreciative of the contributors that participated in this collection.

Note: I’m an Amazon Affiliate. If you’re interested in buying Love Is Love, just click on the image below to go through my link. I’ll make a small commission!

View all posts by bookspoils

Support creators you love. Buy a Coffee for nat (bookspoils) with Ko-fi.com/bookspoils